Alexander Pope said: “The proper study of mankind is man.” The teachings of Theosophy enable us to follow Pope’s advice with fullness and completeness, for Theosophy teaches not only about the physical, material person, but also of the emotions, intellect and spiritual nature. Some of the age-old teachings about humanity which form part of what is known as the Ancient Wisdom, or Theosophy, relate directly to this study.

What then is humanity? How shall we describe it? The occult definition of man makes of him a threefold individual; for he is described as that being in whom highest spirit and lowest matter are united by intellect.

Although thus threefold in essence, humans are said to be manifest in seven ways – or to express themselves through seven ‘vehicles’ or bodies. Of these seven bodies, the physical is the densest, the other six being built of finer substances until the highest, most tenuous, and most spiritual ‘body’ and state of consciousness is reached. Thus concerning man, it is said that he is a three-fold immortal, spiritual being, incarnated in four mortal, material bodies. This sevenfold constitution is sometimes symbolised by an equilateral triangle placed upon a square.

The three parts of each individual’s spiritual nature are reflections of the will, wisdom and intelligence of the Supreme Deity, the Blessed Trinity. The pertinent teaching concerning both the Deity and immortal man is that they are threefold; for God, the Trinity, reproduces Himself as the threefold Spiritual Soul in mankind – made in God’s image. In this spiritual aspect of his nature, man – sometimes called the Microcosm – is forever at one with the Divine or Macrocosm. The immortal and eternal God and the spirit of man are one spirit. The Deity is in no sense external to, different or separate from mankind. They are one and indivisible throughout eternity. This is the one great truth in which resides the secret of supreme achievement and the attainment of power and peace. When the individual fully realises his/her unity with God, then the power of the Cosmos is at his/her disposal.

In the divine aspect of his nature, man is immune from death. The solution given by Theosophy is that the essential being is immortal; only the body dies. Individuality, capacities, character, interests and affections all persist after bodily death. The faculties attained during life are permanent powers of the threefold Inner Self.

When we are conscious solely in this fourfold material and mortal aspect of our nature, we are temporarily unconscious of both our divinity and unity with God. As our evolution proceeds, we gradually rediscover this lost knowledge of oneness with the Deity. This is the ultimate secret of life. The salvation of man, following his so-called fall, is an ascent into full experience of the fact of God’s image at man’s very core.

Why then, we may ask, is the human spirit incarnate in a physical body? The purpose of our existence is spiritual evolution and this is a dual process, part spiritual, part bodily. Evolution consists of the gradual unfoldment from latency to full potency of man’s threefold spiritual attributes as well as the development of his four material vehicles to a condition in which they perfectly make manifest his threefold spiritual attributes. These two processes – spiritual and bodily – are parallel. Inner unfoldment is accompanied by outer development of the bodies to become a more perfect temple of the Inner God.

This is the solution of the problem of the meaning and purpose of life – purpose which is glorious in the extreme. For the goal of human evolution is the standard of perfection described in Christianity as ‘the measure of the stature of the fullness of Christ’. This implies the attainment of a divine state of omnipotence – or perfected and resistless will; of omnipresence – or perfected and all-embracing love; and of omniscience – or perfected and all-inclusive knowledge. Furthermore, and most importantly, the attainment of this perfection is absolutely certain for every person. The command, “Be therefore perfect, even as your Father in heaven is perfect” will be literally obeyed by the Spiritual Selves of all human beings. All God’s children will one day reach His feet, however far they may stray.

Now we come to a most important theosophical idea. This human goal of perfection has already been reached by some people. Such perfect ones are known as World Saviours, Adepts, Masters of the Wisdom. These super-human beings constitute the Inner Government of the world and are the true spiritual Teachers and Inspirers of humanity.

How is this state of perfection or adeptship attained? Theosophy replies: By a succession of lives here on earth. The goal of human perfection is attained through a series of incarnations in material vehicles, which are newly formed during the pre-natal period of each succeeding life. Involved in this idea of evolution is a further most important truth, which is that all such human incarnations are connected with each other by the operation of the law of cause and effect – or readjustment. All actions, feelings, and thoughts produce their own natural and appropriate reaction. Such reactions may follow their causative actions immediately, later in the same life, or in succeeding incarnations.

This law of cause and effect works something like this: actions motivated by love, service and unselfishness produce pleasure and a growing freedom of self-expression, which encourage the actor to repeat them. But actions motivated by dislike, greed and selfishness produce pain and an increasing limitation of self-expression, which discourage the actor from repeating them. Such is the law.

Suffering then is not retribution imposed by the Deity, as a punishment inflicted from above. Neither is pain an accidental adversity. All pain is self-inflicted, and is designed to inform the actor of transgressions. The law is therefore truly beneficent and educative in its ultimate effect.

The way to escape from sorrow is defined in the Lord Christ’s Sermon on the Mount and in that teaching of the Lord Buddha called the Noble Eightfold Path. Here according to Buddhism are the eight ways to enduring happiness: Right Belief, Right Thought, Right Speech, Right Action, Right Means of Livelihood, Right Exertion, Right Remembrance, Right  Meditation. The Lord Buddha summed up these teachings on the way to happiness in these words: “To cease from sin, to get virtue, to purify the heart, to serve the world.”

Such are some of the teachings of Theosophy concerning the evolution of the spiritual soul to the stature of the perfect person.

Originally titled Man’s Spiritual Self and its Goal of Perfection and taken from a condensed version of an article in Theosophy in New Zealand, December 2006 and published in Theosophical Digest Vol. 22 No. 2.

Geoffrey Hodson (1886-1983) was a theosophical author and international lecturer, occultist and super-physical researcher, Liberal Catholic priest, Co-Freemason (32 degrees) and humanitarian. Born and bred in England, Geoffrey eventually became a New Zealand citizen living in Auckland and inspiring all those who met him. Information about his rich inner life is contained in his books: Light in the Sanctuary, The Occult Diary of Geoffrey Hodson, The Yogic Ascent to Spiritual Heights and Illuminations of the Mystery Tradition. 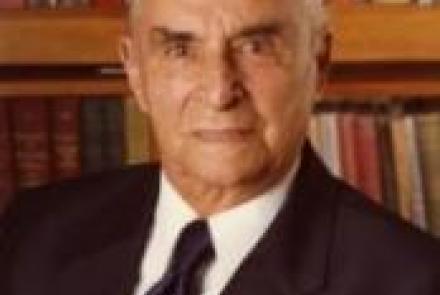