ADEPT is a word that comes from the Latin adeptus, meaning "obtained, attained". It is commonly used to describe a highly skilled person; an expert in a particular discipline.

In Theosophical literature this term is employed in connection with the Occult Science and the Esoteric Philosophy. The word is used to define a wide variety of degrees of knowledge of Occultism, from relatively advanced students to Masters of the science. The term does not imply high spiritual and moral development, since there is mention to "white" and "black" Adepts, meaning those who use the occult powers for unselfish and selfish purposes respectively. The high Adepts working for the welfare of humanity are also known as Masters of Wisdom, Mahātmas, Arhats, or simply "Brothers".

Adept (Lat.). Adeptus, “He who has obtained” In Occultism one who has reached the stage of Initiation, and become a Master in the science of Esoteric philosophy.[1]

Mahatma K. H. wrote: "The adept is the rare efflorescence of a generation of enquirers".[2] Thus, relatively speaking, there are few Adepts in the world. As Mme. Blavatsky's stated: "Were adeptship easy of attainment many would achieve it, but it is the hardest task in nature".[3]

In the Theosophical literature the high Adepts are Initiates of various degrees, of which there are seven.[4]

The word "Adept" was used in a general way by Mme. Blavatsky. The word Master, however, seems to be reserved to high adepts, who work in line with the evolutionary movement. This idea is expressed to certain extent by Charles Johnston in an article published in H. P. Blavatsky's Collected Writings:

Then she told me something about other Masters and adepts she had known -- for she made a difference, as though the adepts were the captains of the occult world, and the Masters were the generals. She had known adepts of many races, from Northern and Southern India, Tibet, Persia, China, Egypt; of various European nations, Greek, Hungarian, Italian, English; of certain races in South America, where she said there was a Lodge of adepts.[5]

A review from H. P. Blavatsky about a novel of "deep philosophical and occult truths" written by Franz Hartmann says:

The hero follows, and finds he is brought to a “theosophical monastery,” in a hidden valley of the most gorgeous description. Therein he meets, to his surprise, with adepts of both sexes; for, as he learns later:—

"What has intelligence to do with the sex of the body? Where the sexual instincts end, there ends the influence of the sex."[6]

In May, 1880, Col. Olcott wrote an article in The Theosophist in answer to a claim by Dr. George Wyld, who stated that no woman had become an Adept. The Colonel wrote:

It is equally incorrect to say that no woman has become an adept. Not to mention one example which will immediately recall itself to every Theosophist, I may say that I personally have encountered in India two other initiated women, and know of a number of others in the East.[7]

In June, 1889, C. S. Stockholm sent a few questions to the editors of the Theosophical Journal Lucifer. One of them was about the existence of Women Adepts:

Has any woman ever attained to Adeptship proper? Will her intellectual and spiritual nature and gifts permit it, even while supposing that her physical nature might endure the hardships therefrom indispensable?

To this, H. P. Blavatsky answered:

Woman has as good a chance as any man has to reach high Adeptship. Why she does not succeed in this direction in Europe is simply due to her early education and the social prejudice which causes her to be regarded as inferior to man.[8]

T. Subba Row, considered by Mme. Blavatsky to be her equal in occultism, wrote:

There are instances of females becoming the greatest Adepts. Whether an individual is male or female depends upon temperament as much as anything else. . . . There is one woman who still stands in the list of the Mahachohans of one of the greatest Rays--that to which H ... belongs. She is not merely a great Adept of that Ray, but had made many original discoveries. . . There is a Ray specially adapted to women; it is sometimes called "the body of love". Its Logos is rather a female than a male; it belongs to the magnetic pole of the universe. I do not think there will ever be a female Adept of the First Ray, because it belongs entirely to the positive pole.[9]

To this, Damodar K. Mavalankar, a chela of Mahatma K. H. wrote:

It is difficult to see any good reason why females should not become Adepts. None of us, Chelas, are aware of any physical or other defect which might entirely incapacitate them from undertaking the dreary ordeal. It may be more difficult, more dangerous for them than it is for men, still not impossible. The Hindu sacred books and traditions mention such cases, and since the laws of Nature are immutable, what was possible some thousand years ago must be possible now. . . . In Nepaul, we all know, there is a high female Adept. And in Southern India, flourished at a recent date, another great female Initiate named Ouvaiyar. Her mysterious work in Tamil on Occultism is still extant. It is styled Kural, and is said to be very enigmatically written, and consequently inexplicable. In Benares too lives a certain lady, unsuspected and unknown but to the very few. . .[10]

Mme. Blavatsky added an interesting perspective about the possibilities of high women adepts. In talking about the divine virgin figures such as the Gnostic Sophia she wrote:

Śakti being a female principle, it is fully manifested through a woman, although, properly speaking, the inner man is neither male, nor female. It is only the preponderance of either of the two principles (positive and negative) which determines the sex. Now, this preponderance is determined by the Law of Affinity; and hence in a woman is manifested abnormally the occult power represented by Śakti. She is moreover gifted with a wonderfully vivid imagination—stronger than man’s. And as the phenomenal is the realization or rather the manifestation of the IDEAL, which can be properly and strongly conceived only by a powerful IMAGINATION—a WOMAN-ADEPT can produce high occultists—a race of “Buddhas and Christs,” born “without sin.” The more and the sooner the animal sexual affinities are given up, the stronger and the sooner will be the manifestation of the higher occult powers which alone can produce the “immaculate conception.” And this art is practically taught to the occultists at a very high stage of initiation.[11] 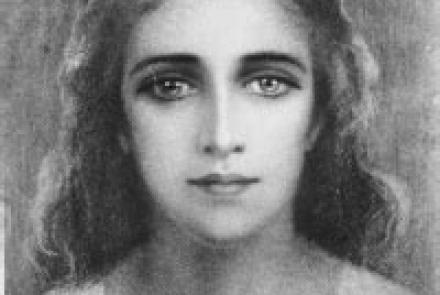