Notwithstanding the many articles which have appeared in this magazine upon the above subject, much misunderstanding and many false views seem still to prevail. What are Chelas, and what are their powers? Have they faults, and in what particular are they different from people who are not Chelas? Is every word uttered by a Chela to be taken as gospel truth?
These questions arise because many persons have entertained very absurd views for a time about Chelas, and when it was found that those views should be changed, the reaction has been in several cases quite violent.
The word "Chela" simply means a disciple; but it has become crystallized in the literature of Theosophy, and has, in different minds, as many different definitions as the word "God" itself. Some persons have gone so far as to say that when a man is a Chela he is at once put on a plane when each word that he may unfortunately utter is taken down as ex cathedra, and he is not allowed the poor privilege of talking like an ordinary person. If it be found out that any such utterance was on his own account and responsibility, he is charged with having misled his hearers.
Now this wrong idea must be corrected once for all. There are Chelas and Chelas, just as there are MAHATMAs and MAHATMAS. There are MAHATMAS in fact who are themselves the Chelas of those who are higher yet. But no one, for an instant, would confound a Chela who has just begun his troublous journey with that greater Chela who is a MAHATMA.
In fact the Chela is an unfortunate man who has entered upon "a path not manifest," and Krishna says that "that is the most difficult path."
Instead of being the constant mouthpiece of his Guru, he finds himself left more alone in the world than those who are not Chelas, and his path is surrounded by dangers which would appall many an aspirant, were they depicted in natural colors, so that instead of accepting his Guru and passing an entrance examination with a view to becoming Bachelor of the Art of Occultism under his master's constant and friendly guidance, he really forces his way into a guarded enclosure, and has from that moment to fight and conquer – or die. Instead of accepting he has to be worthy of acceptance. Nor must he offer himself. One of the Mahatmas has, within the year, written – "Never thrust yourself upon us for Chelaship; wait until it descends upon you."
And having been accepted as a Chela, it is not true that he is merely the instrument of his Guru. He speaks as ordinary men then as before, and it is only when the master sends by means of the Chela's Magnetism an actual written letter, that the lookers-on can say that through him a communication came.
It may happen with them, as it does with any author occasionally, that they evolve either true or beautiful utterances, but it must not be therefore concluded that during that utterance the Guru was speaking through the Chela. If there was the germ of a good thought in the mind, the Guru's influence, like the gentle rain upon the seed, may have caused it to spring into sudden life and abnormally blossom, but that is not the master's voice. The cases in fact are rare in which the masters speak through a Chela.
The powers of Chelas vary with their progress; and every one should know that if a Chela has any "powers," he is not permitted to use them save in rare and exceptional cases, and never may he boast of their possession. So it must follow that those who are only beginners have no more or greater power than an ordinary man. Indeed the goal set before the Chela is not the acquisition of psychological power; his chief task is to divest himself of that overmastering sense of personality which is the thick veil that hides from sight our immortal part – the real man. So long as he allows this feeling to remain, just so long will he be fixed at the very door of Occultism, unable to proceed further.
Sentimentality then, is not the equipment for a Chela. His work is hard, his road stony, the end far away. With sentimentality merely he will not advance at all. Is he waiting for the master to bid him show his courage by precipitating himself from a precipice, or by braving the cold Himalayan steeps? False hope; they will not call him thus. And so, as be is not to clothe himself in sentiment, the public must not, when they wish to consider him, throw a false veil of sentimentality over all his actions and words.
Let us therefore, henceforth, see a little more discrimination used in looking at Chelas.
Theosophist, October, 1884
H. P. Blavatsky 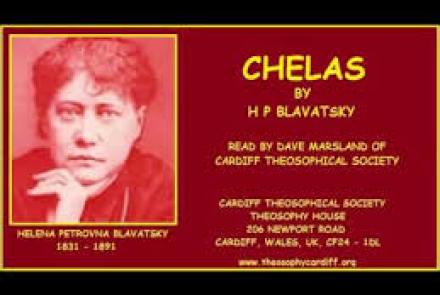