Does Theosophy Have Core Teachings? - compiled by Daniel Caldwell

Does Theosophy Have Core Teachings? - compiled by Daniel Caldwell

Some theosophical students have written that true Theosophy does not have core teachings or doctrines. These students have characterized those who believe Theosophy has definite teachings as "Core Theosophists" and labeled them as "dogmatists", "fundamentalists", and with other negative terms.

The work now submitted to public judgment is the fruit of a somewhat intimate acquaintance with Eastern Adepts and study of their science ... we came into contact with certain men, endowed with such mysterious powers and such profound knowledge that we may truly designate them as the sages of the Orient. To their instructions we lent a ready ear ... (I, v, vi)

... From the first ages of man, the fundamental truths of all that we are permitted to know on earth was in the safe keeping of the adepts of the sanctuary ... those guardians of the primitive divine revelation, who had solved every problem that is within the grasp of human intellect, were bound together by a universal freemasonry of science and philosophy, which formed one unbroken chain around the globe. (I, 37-38)

There are, scattered throughout the world, a handful of thoughtful and solitary students, who pass their lives in obscurity, far from the rumors of the world, studying the great problems of the physical and spiritual universes. They have their secret records in which are preserved the fruits of the scholastic labors of the long line of recluses whose successors they are ... (I, 557)

The esoteric doctrine ... teaches ... that the one infinite and unknown Essence exists from all eternity, and in regular and harmonious successions is either passive or active. In the poetical phraseology of Manu these conditions are called the 'day' and the 'night' of Brahma. The latter is either 'awake' or 'asleep.' ... Upon inaugurating an active period, says The Secret Doctrine, an expansion of this Divine essence, from within out-wardly, occurs in obedience to eternal and immutable law, and the phenomenal or visible universe is the ultimate result of the long chain of cosmical forces thus progressively set in motion. In like manner, when the passive condition is resumed, a contraction of the Divine essence takes place, and the previous work of creation is gradually and progressively undone. The visible universe becomes disintegrated, its material dispersed; and 'darkness,' solitary and alone, broods once more over the face of the 'deep.' To use a metaphor which will convey the idea still more clearly, an out breathing of the 'unknown essence' produces the world; and an inhalation causes it to disappear. This process has been going on from all eternity, and our present universe is but one of an infinite series which had no beginning and will have no end. (II, pp. 264-265)

Gautama, no less than all other great reformers, had a doctrine for his 'elect' and another for the outside masses ... Gautama left the esoteric and most dangerous portion of the 'secret knowledge' untouched ... (II, 319)

... Many are those who ... will remain in doubt and mortal agony as to whether, when man dies, he will live again, although the question has been solved by long bygone generations of sages ... except the initiates, no one has understood the mystic writing. The key was in the keeping of those who knew how to commune with the invisible Presence, and who had received, from the lips of mother Nature herself, her grand truths ... (I, 573)

... This 'secret doctrine' contains the alpha and omega of universal science; therein lies the corner and the keystone of all the ancient and modern knowledge; and alone in this ... doctrine remains buried the absolute in the philosophy of the dark problems of life and death ... (I, 511)

Thus is it that all the religious monuments of old, in whatever land or under whatever climate, are the expression of the same identical thoughts, the key to which is in the esoteric doctrine ... And the clergy of every nation, though practicing rites and ceremonies which may have differed externally, had evidently been initiated into the same traditional mysteries which were taught all over the world ... (I, 561)

... The Northern seer Swedenborg, advises people to search for the lost word among the hierophants of Tartary, China and Thibet; for it is there, and only there now ...

... The four Vedas; the Books of Hermes; the Chaldean Book of Numbers; the Nazarene Codex; the Kabala ... ; the Sepher Jezira; the Book of Wisdom ... ; the Brahmanas; the Stan-gyour, of the Thibetans; all these volumes have the same ground-work. Varying but in allegories they teach the same secret doctrine which ... will prove to be the Ultima Thule of true philosophy, and disclose what is this lost word. (I, 580)

... What we desire to prove is, that underlying every ancient popular religion was the same ancient wisdom- doctrine, one and identical, professed and practiced by the initiates of every country, who alone were aware of its existence and importance ... A single glance ... is enough to assure one that it could not have attained the marvelous perfection in which we find it pictured to us in the relics of the various esoteric systems, except after a succession of ages. A philosophy so profound, a moral code so ennobling, and practical results so conclusive and so uniformly demonstrable is not the growth of a generation, or even a single epoch. Fact must have been piled upon fact, deduction upon deduction, science have begotten science, and myriads of the brightest human intellects have reflected upon the laws of nature, before this ancient doctrine had taken concrete shape. The proofs of this identity of fundamental doctrine in the old religions are found in the prevalence of a system of initiation; in the secret sacerdotal castes who had the guardianship of mystical words of power, and a public display of a phenomenal control over natural forces, indicating association with preterhuman beings ...

As we proceed, we will point out the evidences of this identity of vows, formulas, rites, and doctrines, between the ancient faiths. We will also show that not only their memory is still preserved in India, but also that the Secret Association is still alive and as active as ever ... the chief pontiff and hierophant, the Brahmatma, is still accessible to those 'who know,' though perhaps recognized by another name; and that the ramifications of his influence extend throughout the world ... (II, 99-100)

Our examination of the multitudinous religious faiths that mankind, early and late, have professed, most assuredly indicates that they have all been derived from one primitive source. It would seem as if they were all but different modes of expressing the yearning of the imprisoned human soul for intercourse with supernal spheres. As the white ray of light is decomposed by the prism into the various colors of the solar spectrum, so the beam of divine truth, in passing through the three-sided prism of man's nature, has been broken up into vari-colored fragments called religions. And, as the rays of the spectrum, by imperceptible shadings, merge into each other, so the great theologies that have appeared at different degrees of divergence from the original source, have been connected by minor schisms, schools, and off-shoots from the one side or the other. Combined, their aggregate represents one eternal truth; separate, they are but shades of human error and the signs of imperfection ... " "What has been contemptuously termed Paganism, was ancient wisdom replete with Deity; and Judaism and its offspring, Christianity and Islamism, derived whatever of inspiration they contained from this ethic parent. Pre-Vedic Brahmanism and Buddhism are the double source from which all religions sprung; Nirvana is the ocean to which all tend. (II, 639) 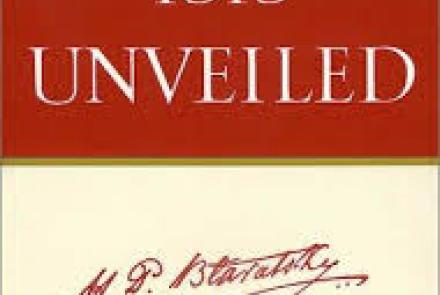