This is one of the best books about the Gnostics written prior to the Nag Hammadi discoveries. G.R.S. Mead, who also translated the Pistis Sophia, summarizes what was known about the Gnostics at the turn of the 20th century. At that time, a better picture of the Gnostics was emerging, based on several papyri which had been recently discovered. Although there had been a lot of academic research on this subject, most of the key works were in German or French. Therefore this book and The Gnostics and Their Remains are the only two major books in English on this subject currently in the public domain.

It was becoming increasingly obvious that early Christianity was a wide spectrum of sects, the record of which had been subsequently forgotten or suppressed by the Church. The Gnostics had deep connections with ancient Mystery religions, Pythagoreanism, Hinduism and other ancient beliefs. Most of the sacred texts of Gnosticism were long lost or survived only in small quotes.

Mead draws on information provided both by the Early Church Fathers hostile to Gnosticism, and the available corpus of actual Gnostic documents at the time, cryptic and fragmentary as it was. He includes excerpts from previously untranslated manuscripts, and extensive summaries of the Pistis Sophia and the writings of the critics of Gnosticism. This book is required reading for anyone who wants to understand Gnosticism and the development of early Christianity. 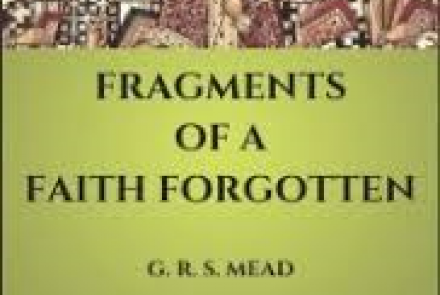