The Future is Now - J Krishnamurti

The Future is Now - J Krishnamurti

When Krishnamurti went to India in November 1985, no one could have guessed that he was within four months of his death. Although in his 90-first year and, naturally, showing signs of bodily weakness, he gave public talks and took part in discussions in different parts of India with all the vigour and the same passionate concern for the future of humanity as he has shown for the previous sixty years.

He spoke of the facts of daily living, stressing always that in spite of the amazing technological achievements of modern times, man, psychologically, had remained the barbarian he was when he first appeared on the earth. Each of us, he maintained, was responsible for the brutality, butchery and divisiveness of the society in which we live because society was only a reflection of our inner selves, and nothing could save the world from the chaos it was in but a mutation in each human psyche. He says the mutation could be brought about, he claimed, but it must be now, what we are today we should still be tomorrow.

Krishnamurti's message cannot be ignored. After reading him one can no longer shrug one's shoulder and say "I know we are headed for disaster but what can I do about it?" Krishnamurti was one of the world's great teachers. His vision and influence spanned a very long life, and his followers are found the world over. As in most books, this, this final message, is transmitted in the form of public conversations in question-and-answer sessions. 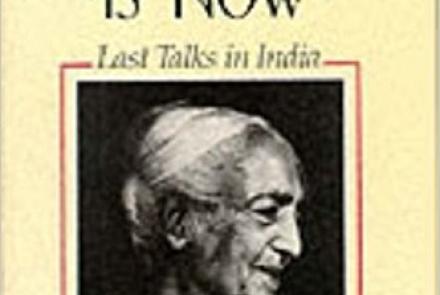