HPB and the Masters of the Wisdom

HPB and the Masters of the Wisdom

SIXTEEN years and a half have gone since Helena Petrovna Blavatsky passed away from this mortal world. Yet attacks are still made upon her veracity, upon her character, and good and sympathetic men still turn away from the Theosophical Society with: " Oh! I do not care to belong to it; it was founded by Mme. Blavatsky, who was convicted of fraud by the Psychical Research Society." The articles which defended her at the time have long been out of print, and are forgotten; Dr. Hodgson, the writer of the S.P.R. report, became a believer in phenomena far more wonderful than those which he· denied in his youthful self-confidence, and also became himself the victim of misrepresentation and ridicule. The large circulation of Mme. Blavatsky's priceless works, the spread of the ideas which she spent her life in learning and teaching, the growth of the Theosophical Society which she founded, at the orders of her Master, and with the aid of her colleague, Colonel H. S. Olcott, the ever-increasing literature published by her pupils- all these form her substantial defence, the justification of her life's work. But it is not right that the continued crucifixion of the Teacher should be regarded with complacency, while the world profits by the teachings, nor that she should be branded as fraud and impostor who brought to this age the truths now gaining such world-wide acceptance. It is but just that her defence should be obtainable so long as she is slandered. Therefore in who reverence her as my first Teacher, and who keep her in my heart with unceasing gratitude as the one who led me to my Master, whom I have now served with ever-increasing thankfulness for more than eighteen years-place here on record the facts of the past, with such comment as seems necessary. 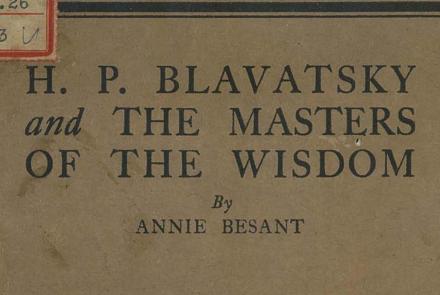