To this Autobiography of H. P. Blavatsky the compiler contributes nothing original except the idea of bringing together, for the information of those interested in Occultism and its greatest modem exponent, all the available events, experiences and relevant facts of that vigorous, brave, mysterious and wonderful life, and arranging them in their proper sequence.

This task has been somewhat similar to what H. P. B. describes as her method of writing Isis Unveiled,: “ When I think and watch my thoughts, they appear to me as though they were like those little bits of wood of various shapes and colours in the game known as casse tete: I pick them up one by one, and try to make them fit each other, first taking one, then putting it aside until I find its match, and finally there comes out in the end something geometrically correct.” The difference lies in the fact that it was her thoughts which she was fitting together, while I have for my pieces of the game the facts of her life, gleaned from many sources.

This collecting and sifting has been carried on for seven years. It began when the compiler was called to Adyar in 1927 by Mr. C. Jinarajadasa at the order of the President, Dr. Annie Besant, to take up the work of arranging and cataloguing the Archives of the Theosophical Society. Such a task necessitated wide reading; every book, pamphlet, magazine, newspaper, letter, etc., which had the least bearing on the events and subjects involved, must be considered.

It soon became evident that a great deal of matter relating to Mme Blavatsky was available, and that many of the gaps in her career might be filled, at least partially, by a thorough collection and careful assembling of the data so widely scattered. This idea took definite form when Dr. George Arundale urged me, as I was familiar with the Archives, to write articles on such topics as still had a current interest, and secured the permission of Dr. Besant for such use of the Archives.

It is my hope that my own peculiar creation in this book is, first a portrait of H. P. B. which has never yet been painted in words and which could not have been accomplished without the wide, yet meticulous, collection of material, which produces not only a life-like general resemblance, but also correct details, all the little finishing touches which complete the picture. Second: a book which sheds new light on the Great Science, Occultism, by this exposition of the life of a great Occultist. H. P. B. asks : " Is it too much to believe that man should be developing new sensibilities and a closer relation with nature ? ” And answers: “ The logic of evolution must teach as much, if carried to its legitimate conclusion.”

Thanks are due to Dr. Annie Bcsant and Dr. George Arundalc for permission to use material from the Archives of the Thcosophical Society. A considerable amount of hitherto unpublished matter is incorporated in this Autobiography from that source, as will be seen by a glance at the Table of References, where all such data are labelled ” Archives ” or " Scrap-books.” Thanks arc also due to Mr. Trevor Barker for permission to quote from The Mahatma Letters and from The Letters of II. P. Blavatsky to A. P. Sinnett, and to Dr. Eugene Rollin Corson for similar authorisation in regard to his book, Some Unpublished Letters of Helena Petrovna Blavatsky. Lastly, sincere appreciation is tendered to Miss Constance Rischbieth of Adelaide, who made possible the leisure required to assemble the book. 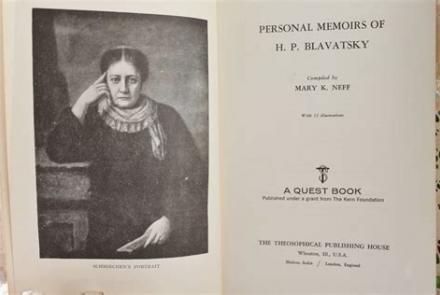