Reincarnation A hope of the World - Irving S. Cooper

In Palestine, on the slopes of Mount Hermon, about forty-five miles north of the Sea of Galilee, are scattered the ruins of an ancient city, Caesarea Philippi by name. One day, while approaching the outskirts of this city—if we may trust the story of the Gospels1—the Christian Master asked His disciples a question of such far-reaching importance that, had its full meaning been understood by later generations, the whole religious history of Western civilization would have been changed.

“Whom say the people that I am?” He asked. To us the question is almost unintelligible, but the disciples apparently understood His meaning, for one answered that some people thought that Jesus was John the Baptist returned, for John had been beheaded some time before, while others of the disciples said that He was regarded as the reincarnation either of Elias or of Jeremias, both of whom had been dead for centuries. In short, the rumor was current that in the person of Jesus “one of the old prophets is risen again,” which indicates how widespread was the idea of reincarnation at the time. It may be rightly objected, however, that Jesus Himself did not confirm any of the rumors; on the contrary, He apparently approved of the statement that He was the Son of God.

While this is true it should be noticed that nowhere does He deny the truth of reincarnation. In fact, he affirms it in that well-known but little understood statement: But I say unto you, that Elias is come already, and they knew him not, but have done unto him whatsoever they listeth. . . Then the disciples understood that He spake unto them of John the Baptist. Josephus implies, in his history of the wars of the Jews, that the idea of the rebirth of the soul was common among the people, and, judging from several striking passages in the Gospels in addition to those quoted, there is some evidence in support of this implication.

Reincarnation was also well-known to the Romans, for it is referred to by a number of the poets, while among the Greeks it was taught by several of the philosophers, chief among them Plato. Traces of the idea in a modified form are to be found in the ancient Egyptian religion, while in later Alexandria this teaching received much attention from the Neo-Platonists and Gnostics. It was sung in the Sagas of the Norsemen and spread with the legends of the Gauls. It formed part of the mystic lore of the Druids, and even today a belief in the return of the soul still lingers among the Celtic peasantry of Ireland and of Brittany.

Strangely enough, the idea of reincarnation was also current among the Indians on the American continents. From Alaska to Peru, among the Eskimos, the Sioux, the Zunis and the Incas particularly, the idea was taught by the priests and held by the tribesmen. Even among the natives of the Hawaiian Group, of Australia and of the Islands of the South Seas, the idea is not unknown. It is in the East, however, that the teaching of reincarnation has spread most widely and exerted the greatest influence. It is the basic teaching of most of the religious and philosophical systems of India, and today throughout the East hundreds of millions of human beings accept the truth of reincarnation in about the same way that we accept the truth of gravity—as a great natural and inevitable law, which it is foolish to question. Obviously, then, reincarnation is one of the fundamental religious ideas of mankind, quite irrespective of its truth. Its universality is almost equal to the belief in the existence of a divine Power.

The origin of the idea is unknown, for its roots strike so deep into the many layers of human thought deposited through the ages, that it is impossible to trace them to their beginnings. It is surmised that the belief in reincarnation antedates all known history, and certainly traces of it are to be found in all religions and in the myths of nearly all primitive peoples.

Unfortunately, as the idea of reincarnation has come to us from the past, it is nearly always associated with misconceptions and superstitions. No doubt this is due to its very antiquity, but, whatever may be the cause, the superstitions are so repellent to Western ways of thinking, and the misconceptions so illogical, that great discredit has been cast on the philosophical value of the central idea itself. Who is it that yearns to be born as a dog or a bluebottle fly? Yet back of all the fancies clustering round the belief in the rebirth of the soul there iii must surely be a vital truth, else the idea of reincarnation could not have endured for so many thousands of years, nor could it have attracted so many able thinkers.

Part of the work of the Theosophical Society has been to present the vital truth of reincarnation free from misconceptions and superstitions, and it is astounding how quickly thoughtful people have come to regard it with favor. Before the end of the nineteenth-century, only a few score of people in the West had even taken reincarnation seriously, much less made it their working philosophy of life; now it is probable that millions of people in the Western world look upon reincarnation as the most logical explanation of many social, religious, and philosophical problems.

The acceptance of reincarnation has spread far beyond the limits of the Theosophical Society. This is due not to any desire to return to earth—for most people at first shrink from this—but to the inherent reasonableness of reincarnation and to its extraordinary value in explaining the most baffling of human problems.

Those in touch with the currents of modern thought are convinced that reincarnation will soon be generally accepted by most thinking people not because of any passing popularity, but because of its sheer power to convince, to illuminate, and to inspire. It is surely destined to be the Great Idea of the twentieth-century, even as the idea of evolution transformed the conceptions of the previous one. 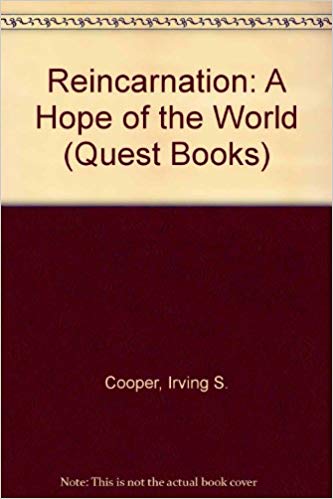