I am not a scientist, but science, particularly quantum physics, intrigues me. Recently I came upon a book entitled Entangled Minds by Dean Radin, a senior scientist at the Institute of Noetic Sciences in Petaluma, California, which advances the thesis that the concept of entanglement in quantum theory may explain psychic faculties and parapsychological phenomena. I have become sufficiently emboldened to suggest that this concept might well apply to a well-known and long accepted principle in numerous spiritual traditions—the law of karma.  Radin does point out early in his book that there are “two flavors of stupidity: Just Plain Stupid and Mentally Deficient.” To avoid being categorized under one or other of those two “flavors,” I propose to tread cautiously on some unexplored aspects of karma, raising more questions than I intend to answer in any definitive manner.

First, what is entanglement? It appears that the word was first used by the noted physicist Erwin Schrödinger to describe the connection between separated particles that persists regardless of distance. Einstein’s famous remark that entanglement is “spooky action at a distance” perhaps encapsulates the phenomenon best. Could it be that connections persist not only over great expanses of space, but also over vast periods of time?

It is recognized that the concept of reincarnation calls for an understanding of the manner by which past existences influence the present. The Buddhist doctrine of the skandhas (or “aggregates”), for example, provides an explanation of the way by which the characteristics or attributes of one personality persist over time and space to influence or constitute the personality of the succeeding life. Beyond the need to offer explanations of how past “lives” might account for present personality traits, tendencies, or capacities, there are other questions that entanglement raises if we dare to apply the idea to such metaphysical notions as karma and rebirth.

First, however, let us put those two ideas–karma and rebirth or reincarnation–into a larger context. These concepts become meaningful when we conceive of the universe as a single organism composed of a vast number of lesser organisms, all interconnected in an immense variety of grades of consciousness and development. The universe is itself undergoing a great evolutionary process, an evolution of consciousness. This process is progressive, moving toward a desirable spiritual goal, which we might define as a “self-revelation (svabhavat) of the Absolute.” The individual human entity is to be an active (that is, self-conscious) part of this process, and the best human life is one that promotes the evolution of the whole toward its ultimate goal. The process is, moreover, orderly, purposeful, and in the truest sense lawful. Therefore H.P. Blavatsky defines karma as “the Ultimate Law of the Universe, the source, origin and fount of all other laws which exist throughout Nature. Karma is the unerring law which adjusts effect to cause, on the physical, mental and spiritual planes of being. As no cause remains without its due effect from greatest to least, from a cosmic disturbance down to the movement of your hand, and as like produces like, Karma is that unseen and unknown law which adjusts wisely, intelligently and equitably each effect to its cause, tracing the latter back to its producer” (Blavatsky, Key to Theosophy, 121–22; emphasis here and in other quotes is in the original). Or as one of Blavatsky’s adept teachers phrased it: “We recognise but one law in the Universe, the law of harmony, of perfect equilibrium” (Chin, 282).

Perhaps we should pause for a moment to consider the use of the term “law” in connection with karma. Usually we consider a law as a rule or edict external to ourselves, imposed by some authority, legislative or judicial. Karma, however, is the principle inherent in the very nature of the universe. As the Mahatma states in the letter quoted above: “Immutable laws...are eternal and uncreated, propelled in the Eternity” (Chin, 282). Or as one student once expressed the concept, “karma is the habit of universal and eternal nature.” It is the way the universe, and all that is within it, behaves.

If karma is simply inherent in the way the universe behaves, a mannerism, as it were, of universal nature (there may be other ways in which universes operate), and if the universe and all within it are involved in an evolutionary process toward a desired goal, the processes we call karma and rebirth present us with positive opportunities to achieve both growth and progressive development. In other words, when properly understood the process is not retributive, arising out of actions in the past, but educative, utilizing both past and present actions (at whatever level–physical, emotional, mental, etc.) as learnings for developing capacities and faculties for the future. Furthermore, both karma and rebirth are purposeful, the tools by which the evolution or unfoldment of consciousness is achieved. They are not to be viewed as burdens to be endured, as the price paid for past pains and pleasures. Nor are they deterministic, as there is a place for human choice in the process (although that place needs to be carefully delineated). Choice, in fact, is the unique quality which we, at the human stage, must bring to the evolutionary process, although to explore that topic here would take us far afield, involving as it necessarily would a complete review of the awakening of the mind, with its numerous potentials, at the appropriate stage of human evolution.

The doctrine of karma needs to be seen as crucial for the individual’s spiritual life: each individual will respond according to the level of spiritual development achieved over the course of successive incarnations. Karma, in such a view–as educational rather than retributive–must be understood as more than just acts, thoughts, deeds, feelings in any one life, but above all as the volition, the intention underlying whatever one does at any level of spiritual unfoldment. Here we may recall the statement in The Mahatma Letters that “the whole individuality is centred in the three middle or 3rd, 4th, and 5th principles. During earthly life it is all in the fourth, the centre of energy, volition–will” (Chin, 123). The fourth principle is kama or emotion, and here indeed, at that level, are some of our toughest problems or karmic lessons. If we recognize the importance of the volitional aspect of karma, the concept takes on a moral significance, even a providential force, which points to a creative and redemptive possibility in every situation. It is not a question of whether the situation is painful or pleasurable, but of what it teaches us, what lesson there is in it for our spiritual growth. Above all, we need to examine our intention as we respond to both painful and pleasurable conditions in our lives.

Now as we attempt to set the notions of karma and rebirth in the larger context of a worldview that posits One Life, One Consciousness, One Law, we may turn to the concept of entanglement as a useful key to unlocking some of the mysteries in those two great principles. If a connection continues to exist between two particles once fused together but now separated, if connections exist between the fluttering of butterfly wings on one continent with tidal waves on the shores of far distant islands, then what of the effect of my thoughts, feelings, actions, intentions as these ripple out across time and space? If all things are interlinked and remain so despite seeming separations, then how do I distinguish causes from what I consider to be effects? Are not those causes themselves effects of previous causes? And is not this whole vast cosmic system simply the child of a previous such system and the parent of the next? What comes to mind are the words used by HPB in the opening stanza of that mysterious text, The Stanzas of Dzyan, on which she based The Secret Doctrine. Translating from an unknown tongue, she wrote that the universe was “once again” in a state of nonexistence (Blavatsky, Secret Doctrine, 1:27). According to HPB, we are in the “Fourth Round” of the present manifestation, whatever that may mean, although surely it must mean that we have all been through this before!

Perhaps one of HPB’s most fascinating discussions about karma occurred in one of the last meetings of the Blavatsky Lodge in London of which we have a record. During a meeting on June 6, 1889, HPB is asked if there is such a thing as unmerited suffering, to which she responds: “Very often you have sufferings through causes generated by other persons, of which you are not guilty at all.” Later she adds, “Very often you suffer for things you have never committed, but you simply happen to fall under this current...You suffer tremendously, and you suffer that which is not merited, and then you have to have an adequate bliss and reward for it” (Gomes, 597). During that session, HPB spoke further on the subject of free will as well as on other aspects of karma, including accidents, which she called the “commas and semicolons” of existence, adding that they are not “preordained.”

A major question which naturally arises when we consider entangled karma is the extent to which there is such a thing as personal karma. We are all accustomed to speaking of my karma or your karma, as though I and you were so completely separate that no relationship existed between us. Yet if all that exists is rooted in the One, must there not exist some kind of relationship, so that whatever I do or think or feel must reverberate or resonate across time and space to affect all other sentient beings? On a very practical level, to what extent is it karmic that my small bank account is affected by the global financial crisis? Or, to take a more useful example, if someone whom I may not even know is terminally ill (which is usually thought of as a karmic condition), to what extent are my thoughts of healing of any benefit whatsoever?

Many other questions arise as we consider the implications of entanglement. And if that concept provides at least a possible explanation for psychic and parapsychic events, why may it not be useful in considering such universal principles as periodicity and causality (or even acausal phenomena)? Since connections continue to exist between particles of matter however much those particles appear to be severed, what of the currents that flow, the connections that always exist, between what I consider to be myself as an independent entity and all other beings in this wondrously beautiful universe, however separate each of them may appear and whether they are viewed as beautiful or ugly?

Truly we live in an entangled universe, and all its modes of behavior are subject to the same universal laws. Karma is but one expression of those laws, the singular expression that ever seeks harmony and equilibrium as we journey on the evolutionary path of ever-expanding consciousness, from the One home to the One. Welcome, all our fellow pilgrims, at whatever stage you may be, mineral, plant, animal, human, adept. We may appear to be separate notes in the great symphony of life, but sound any note and all other notes will respond. Yes, that is karma.

Joy MIlls was president of the Theosophical Society in America from 1965 to 1974. Her works include One Humdred Years of  Theosophy: A History of the Theosophical Society in America; The One True Adventure: Theosophy and the Quest for Meaning; and Reflections on an Ageless Wisdom;  A Commentary on the Mahatma Letters to A.P. Sinnett. She was interviewed in the Summer 2011 issue of Quest. 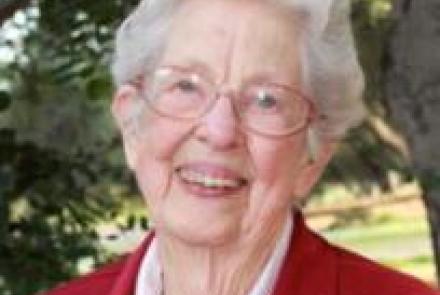