'An abridged version of the view of the Chohan on the T.S. from his own words as given last night. My own letter the answer to your last will follow shortly. K.H.'

The doctrine we promulgate being the only true one, must, supported by such evidence as we are preparing to give become ultimately triumphant as every other truth. Yet it is absolutely necessary to inculcate it gradually enforcing its theories, unimpeachable facts for those who know, with direct inferences deducted from and corroborated by the evidence furnished by modern exact science. That is why Col H.S.O. who works but to revive Buddhism may be regarded as one who labours in the true path of Theosophy, far more than any other man who chooses as his goal the gratification of his own ardent aspirations for occult knowledge. Buddhism stripped of its superstitions is eternal truth, and he who strives for the latter is striving for Theos-sophia, Divine Wisdom, which is a synonym of truth.

For our doctrines to practically react on the so called moral code or the ideas of truthfulness, purity, self-denial, charity, etc., we have to preach and popularise a knowledge of theosophy. It is not the individual and determined purpose of attaining oneself Nirvana (the culmination of all knowledge and absolute wisdom) which is, after all only an exalted and glorious selfishness, but the self-sacrificing pursuit of the best means to lead on the right path our neighbour, to cause as many of our fellow creatures as we possibly can to benefit by it, which constitutes the true Theosophist.

The intellectual portions of mankind seem to be fast dividing into two classes, the one unconsciously preparing for itself long periods of temporary annihilation or states of non-consciousness owing to the deliberate surrender of their intellect, its imprisonment in the narrow grooves of bigotry and superstition, a process which cannot fail to lead to the utter deformation of the intellectual principle; the other unrestrainedly indulging its animal propensities with the deliberate intention of submitting to annihilation pure and simple in cases of failure, to millenniums of degradation after physical dissolution.

Those "intellectual classes," reacting upon the ignorant masses which they attract and which look up to them as noble and fit examples to follow, degrade and morally ruin those they ought to protect and guide. Between degrading superstition and still more degrading brutal materialism the white dove of truth has hardly room where to rest her weary unwelcome foot.

It's time that Theosophy should enter the arena. The sons of Theosophists are more likely to become in their turn Theosophists than anything else. No messenger of truth, no prophet has ever achieved during his life time a complete triumph, not even Buddha; the Theosophical Society was chosen as the corner stone, the foundation of the future religion of humanity. To achieve the proposed object a greater, wiser, and especially a more benevolent intermingling of the high and the low, of the alpha and the omega of society, was determined upon. The white race must be the first to stretch out the hand of fellowship to the dark nations, to call the poor despised "nigger" brothers. This prospect may not smile to all. He is no Theosophist who objects to this principle.

In view of the ever increasing triumph and at the same time misuse of free-thought and liberty (the Universal reign of Satan, Eliphas Levi would have called it), how is the combative natural instinct of man to be restrained from inflicting hitherto unheard of cruelties and enormities, tyranny, injustice, etc., if not through the soothing influence of a brotherhood and of the practical application of Buddha's esoteric doctrines?

For as everyone knows, total emancipation from authority of the one all pervading power or law called God by the Theists — Buddha, Divine Wisdom and Enlightenment or Theosophy by the philosophers of all ages — means also the emancipation from that of human law. Once unfettered [and] delivered from their dead weight of dogmatic interpretations, personal names, anthropomorphic conceptions and salaried priests, the fundamental doctrines of all religions will be proved identical in their esoteric meaning. Osiris, Chrishna, Buddha, Christ, will be shown as different means for one and [the] same royal highway to final bliss Nirvana.

Mystical christianity, that is to say that christianity which teaches self redemption through one's own seventh principle — the liberated Para-atma (Augoeides) called by the one Christ, by others Buddha, and equivalent to regeneration or rebirth in spirit — will be found just the same truth as the Nirvana of mystical Buddhism. All of us have to get rid of our own Ego, the illusory apparent self, to recognise our true self in a transcendental divine life.

But if we would not be selfish we must strive to make other people see that truth, to recognise the reality of that transcendental self, the Buddh, the Christ or God of every preacher. This is why even exoteric Buddhism is the surest path to lead men toward the one esoteric truth.

As we find the world now, whether Christian, Mussalman or Pagan, justice is disregarded and honour and mercy both flung to the winds. In a word, how, once that the main objects of the T. S. are misinterpreted by those who are most willing to serve us personally, are we to deal with the rest of mankind, with that curse known as the "struggle for life," which is the real and most prolific parent of most woes and sorrows and of all the crimes? Why has that struggle become the almost universal scheme of the universe? We answer, because no religion with the exception of Buddhism has hitherto taught a practical contempt for this earthly life, while each of them, always with that one solitary exception, has through its hells and damnations inculcated the greatest dread of death. Therefore do we find that struggle for life raging most fiercely in Christian countries, most prevalent in Europe and America. It weakens in the Pagan lands and is nearly unknown among Buddhist populations. (In China during famine and where the masses are most ignorant of their own or any religion, it was remarked that those mothers who devoured their children belonged to localities where there were the most of Christian missionaries to be found. Where there were none and the Bonzes alone had the field the population died with the utmost indifference.) Teach the people to see that life on this earth even the happiest is but a burden and an illusion, that it is but our own Karma, the cause producing the effect, that is our own judge, our Saviour in future lives, and the great struggle for life will soon lose its intensity. There are no penitentiaries in Buddhist lands and crime is nearly unknown among the Buddhist Tibetans. (The above is not addressed to you, and has nought to do with the work of the Simla Eclectic Society. It is meant only as an answer to the erroneous impression in Mr. Hume's mind of the "Ceylon work" as no theosophy.)

The world in general and Christendom especially, left for two thousand years to the regime of a personal God as well as its political and social systems based on that idea, has now proved a failure. If the Theosophists say, we have nothing to do with all this, the lower classes and the inferior races (those of India for instance in the conception of the British) cannot concern us and must manage as they can, what becomes of our fine professions of benevolence, philanthropy, reform, etc. Are these professions a mockery? And if a mockery, can ours be the true path. Shall we devote our selves to teaching a few Europeans fed on the fat of the land, many of them loaded with the gifts of blind fortune, the rationale of bell ringing, cup growing, of the spiritual telephone and astral body formation, and leave the teeming millions of the ignorant, of the poor and despised, the lowly and the oppressed, to take care of themselves and of their hereafter the best they know how. Never. Rather perish the Theosophical Society with both its hapless founders than that we should permit it to become no better than an academy of magic and a hall of occultism. That we, the devoted followers of that spirit incarnate of absolute self sacrifice, of philanthropy, divine kindness, as of all the highest virtues attainable on this earth of sorrow, the man of men, Gautama Buddha, should ever allow the Theosophical Society to represent the embodiment of selfishness, the refuge of the few with no thought in them for the many, is a strange idea, my brothers.

Among the few glimpses obtained by Europeans of Tibet and its mystical hierarchy of "perfect lamas," there is one which was correctly understood and described. "The incarnations of the Boddisatwa Padma Pani or Avalo-Kiteswara and of Tsong Kapa, that of Amitabha, relinquish at their death the attainment of Buddhahood — i.e. the summum bonum of bliss, and of individual personal felicity — that they might be born again and again for the benefit of mankind." (Rhys Davids) In other words, that they might be again and again subjected to misery, imprisonment in flesh and all the sorrows of life, provided that by such a self sacrifice repeated throughout long and dreary centuries they might become the means of securing salvation and bliss in the hereafter for a handful of men chosen among but one of the many races of mankind. And it is we, the humble disciples of these perfect lamas, who are expected to allow the T. S. to drop its noblest title, that of the Brotherhood of Humanity to become a simple school of psychology? No, no, good brothers, you have been labouring under the mistake too long already. Let us understand each other. He who does not feel competent enough to grasp the noble idea sufficiently to work for it, need not undertake a task too heavy for him. But there is hardly a theosophist in the whole society unable to effectually help it by correcting the erroneous impressions of the outsiders, if not by actually propagating himself the idea. Oh, for the noble and unselfish man to help us effectually in India in that divine task. All our knowledge past and present would not be sufficient to repay him. . . . Having explained our views and aspirations I have but a few words more to add.

To be true, religion and philosophy must offer the solution of every problem. That the world is in such a bad condition morally is a conclusive evidence that none of its religions and philosophies, those of the civilised races less than any other, have ever possessed the truth. The right and logical explanations on the subject of the problems of the great dual principles — right and wrong, good and evil, liberty and despotism, pain and pleasure, egotism and altruism — are as impossible to them now as they were 1881 years ago. They are as far from the solution as they ever were but, — to these there must be somewhere a consistent solution, and if our doctrines will show their competence to offer it, then the world will be the first one to confess that must be the true philosophy, the true religion, the true light, which gives truth and nothing but the truth. 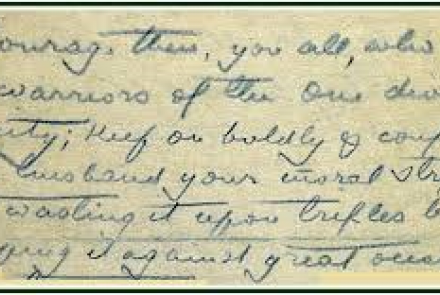