The Theosophical Society has been around for 139 years. But its growth as an organisation has been relatively stagnant in the past more than half a century. Its membership has been declining since 1928 when it had a peak membership of 45,000, down to about 26,000 today. Since 1928, world population has increased three and a half times. Every year, there are 80,000,000 people who are born. If the message of theosophy reaches only 100,000 new people per year, it will take us 800 years before we will reach the number of new people born in one year alone. To reach the population increase of just 2 years, it will take us 1,600 years. We will see that at such a rate, the Theosophical Society will become more and more irrelevant to the changes happening in the world.

130 years ago, the Mahachohan, the teacher of the Adepts, exhorted the leaders of the infant Theosophical Society: “For our doctrines to practically react on the so-called moral code or the ideas of truthfulness, purity, self-denial, charity, etc., we have to preach and popularise a knowledge of theosophy.” (Mahatma Letters Appendix II)

Have we achieved such popularisation? I’m afraid we have not. The word ‘Theosophy’ remains a very unfamiliar word or concept to a large majority of the world.

Have the theosophical doctrines reacted practically on society’s moral code and influenced the conduct of men and women of the world? Again, we have to answer generally in the negative. It is my impression that a very large percentage of our lodges are oriented towards its internal activities rather seeking to actively help solve the problems of society.

It is incumbent upon us that we renew our effort to achieve this vision of the Mahachohan – to make theosophy and the Theosophical Society a part of the mainstream of human society.

To go mainstream means that an idea or practice has become part of the prevailing current in public thought, in other words, most people would somehow be familiar with it or know something about it. It can be a concept like Zen, or meditation, or reincarnation or karma.

How can we successfully enter the mainstream?

I would like to share with you what I consider to be three foundations in the effort to go mainstream:

1. We need to decide what we would like to be known for.

When people hear of theosophy, what comes to their mind? Is it an Eastern cult? An abstruse philosophy? A psychic group? An educational organisation?

Ninety-nine percent of the world who have heard of theosophy will only know us by one or two word associations. For example, it can be ‘esoteric,’ ‘cult,’ ‘clairvoyance,’ ‘Blavatsky,’ ‘brotherhood,’ ‘intellectual,’ ‘Hindu,’ etc. Those few words will determine whether they will become interested and inquire further about theosophy or not. If the associated word is negative or irrelevant, then people will not pursue further the learning of theosophy.

It is important that we deliberately determine the keywords for which theosophy will be known and then popularise them. Will be it ‘oneness,’ ‘brotherhood,’ ‘character building,’ ‘meditation,’ ‘a spiritual way of life,’ etc.?

If we do not deliberately introduce or present theosophy according to the way that it should be known, then there is no other choice but that public opinion will create such impressions or associations, even if very inaccurate or wrong. Wrong impressions will greatly harm the effectiveness of the Theosophical Society.

2. We need to popularise applied theosophy and establish theosophical practices on a wide scale.

In the book Letters of the Masters of the Wisdom, a Master wrote: “Theosophy must not represent merely a collection of moral verities, a bundle of metaphysical Ethics epitomised in theoretical dissertations. Theosophy must be made practical and has, therefore, to be disencumbered of useless discussion... It has to find objective expression in an all-embracing code of life thoroughly impregnated by its spirit... Its followers have to set the example of a firmly outlined and as firmly applied morality before they get the right to point out, even in a spirit of kindness, absence of a like ethic Unity and singleness of purpose in other associations and individuals.” (LMW II, Letter 82)

We must keep in mind the enormous influence that schools can do in moulding young minds in the right direction. If we but glance at the Catholic schools, we will see one of the important secrets of the influence of the Roman Catholic Church. There are numerous Catholic orders that run schools, such as the Jesuits, the La Salle brothers, the Dominicans, the Franciscans, etc. Let's take the Jesuits. Out of about 20,000 Jesuits, there are only 2,400 Jesuits involved in education; but they run 2,129 schools all over the world with 1.7 million students. Many of their graduates become leaders of their countries. Let's look at the La Salle brothers. There are 1,693 La Salle Brothers involved in education, and they have 1,049 schools with almost one million students. The Catholic Church itself has more than 200,000 schools around the world, enrolling 52,000,000 students. That is more than the combined population of Australia, New Zealand, Sweden, Norway and Finland. You can imagine the influence of the Catholic Church in countries where it has schools.

Why doesn't the TS be intensively involved in education? Why can't it have at least 100 schools by the end of this century? We have the underlying philosophy, we have the methodology, we have the lands, and we have so many educators among our ranks.

We can look at many other examples of how applied practice and institutions can help mould the public mind. Zen became popular because of the example of monks in Japan as a practice for inner equanimity. Because they started it by their example, there are today more than three million Zen practitioners in Japan and millions more outside of Japan.

The organisation called PETA (People for Ethical Treatment of Animals) was only started in 1980 by two persons. But because of its applied advocacy, it has done more to make people aware of animal rights and vegetarianism than any other organisation. It is the most influential animal rights organisation in the world today with an annual budget of $34 million. Do you know that the annual budget of the international TS is only 1% of this organisation which focuses mainly on animal welfare? With the deep and noble goals of the TS, why can't we have a budget a hundred times what we have now? Sometimes, we worry that there is not enough money to start these. I think the reality is that we don't have enough worthwhile theosophical projects that will draw the funds that are looking for good projects.

It is essential that we as a Theosophical Society should be involved in actual practices and institutions that will help the daily life of individuals. We must demonstrate the usefulness of theosophical principles in solving the problems of living and the problems of society.

For theosophy to become part of the mainstream, we need to become relevant to the daily life of the individual, otherwise the theosophical message will be drowned out by the billions of bits of information that are broadcast every day.

It can be as simple as a centre for stress management, or it can go deeper into meditation, or yoga, or well-being. It can be on marital harmony, parenting, education, the establishment of schools, vegetarianism, health and fitness, animal welfare, ecology, organic agriculture, energy conservation, compassionate entrepreneurship, leadership, politics, youth development, social development, and so on and on. It is best that different theosophical groups with similar advocacies and projects should coordinate with each other in order to develop synergy, otherwise there will be a tendency for individual projects to just fade and die a natural death.

If the TS itself does not pioneer the application of its tenets and principles, then it will remain as an intellectual philosophy that will have little relevance to the problems of the world.

3. The third foundation is the need to train qualified advocates of theosophy and applied theosophy.

These advocates are those who will competently face the general public and explain about theosophy and its usefulness. The availability of qualified advocates is absolutely essential because if we do not have these people, then, even if we become popular, such popularity will backfire and we will become notorious because those who speak on behalf of the TS may not really be proper representatives of the ageless philosophy.

For this reason, it is essential for the international TS and the most active sections in the world to undertake a concerted and integrated program of training theosophical workers in three areas:

This effort to develop a growing corps of advocates must be done on an international scale because many sections do not have the trainers or the experience in conducting such training. The international headquarters and the strong sections must help the less active theosophical groups.

But we must not forget that such a training should not limit itself to theoretical topics, but must include the applied side of theosophical knowledge. Ideas alone cannot change the world. It is the application of these ideas that will change the world.

These then are the three important foundations of mainstreaming theosophy in the future:

These programmes, especially the 2nd and 3rd programmes, may take 30 to 50 years before we can see its real fruit. But they are the solid foundations upon which we can build the popularisation of theosophy and making theosophy a cornerstone of future religions and civilisation.

There will be many difficulties and obstacles in attaining such visions. But we must remember that such visions were not just conceived by ordinary mortals. The theosophical ship was launched by no less than several Masters of the Wisdom and its agenda is no less than the transformation of entire masses of people and societies.

Are we failing the inner founders of the Theosophical Society by being too timid about difficult programmes? We need to take risks. When the idea is right, there is no failure, just temporary setbacks.

Permit me to invite all theosophists to think about this and see what we can do no matter how humble our beginning. Let us join hands and demonstrate to the world that this thing called theosophy holds the key to the long-term solutions of the problems of the world. And, brothers and sisters, let us start today.

Vicente (Vic) Hao Chin Jr is an acclaimed international theosophical leader, speaker, educationalist and writer. He is the past President of the Theosophical Society in the Philippines as well as the Indo-Pacific Federation of the TS. Vic is the author of The Process of Self-Transformation and has compiled and edited the chronological edition of The Mahatma Letters to A. P. Sinnett. He is Editor-in-Chief of the Theosophical Digest and Associate Editor of the Theosophical Encyclopedia. Vic is the President of Golden Link College, a theosophical school in the Philippines, envisioning the integration of self-transformation and academic learning, which he initiated and established in 2002. 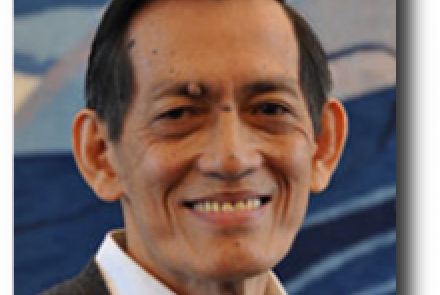