Master K.H. on Concentration  and Union with the Higher Self

Master K.H. on Concentration  and Union with the Higher Self

Master K.H. on Concentration
and Union with the Higher Self

Concentrate on the idea of the Higher Self., say for one half an hour at first. Permit no other thought. By degrees you will be able to unite your consciousness with the Higher Self. The Higher Self is always to be sought for within. To look outside is a fatal mistake.

The effort to be made is to reach the highest state of which you are capable and to hold yourself there. The registration of consciousness of this higher plane takes place at the last moment of the passage back to the physical, and this, together with the fact that "the Double" is often active, often produces a state of double consciousness, and the latter is a source of error.

In acquiring the power of concentration the first step is one of blankness. Then follows, by degrees, consciousness, and finally the passage between the two states becomes so rapid and easy as to be almost unnoticed. During the moment of concentration the body is in a brown study and retains a sort of dream perception (this of course applies only to chelas).

The great difficulty to be overcome is the registration of the knowledge of the Higher Self on the physical plane.  To accomplish this, the physical brain must be made an entire blank to all but the Higher Consciousness; and the double (or astral body) must be paralyzed or error and confusion will result.

In the first place, try to put yourself in such a state as not to feel anything that happens to the physical body, in fact to separate yourself from your body. If in this attempt you feel anything, any foreign influence coming into you from outside, break off the concentration at once.

Your best method is to concentrate on the Master as a Living Man inside you. Make his image in your heart and a focus of concentration so as to lose all sense of bodily existence in the one thought.

During concentration, one must make oneself as positive [resistant] as possible to spooks and all astral lower influences, but as negative [receptive] as possible to the influence of the Master.

The idea of the Master will prove the best influence against spooks, etc. The effort is far more dangerous for psychics than for others because their bodies are much more sensitive and attract more various other powers of nature.

A sense of freedom is one of the marked characteristics of the Higher Consciousness and the will effort needed to silence the body is much the same as that needed to forget pain. No two men pass through the same experience in effecting the union with the Higher Self.

The true Higher Self is "the Warrior" referred to in Light on the Path; it never acts on this plane, where the active agent, the real actor is the Manas. This union with the Higher Self is the best means of killing out the "sense of separateness," and therefore man must become the slave of the Higher Self.

The Higher Self is shapeless, sexless, formless. It is a state of consciousness, a breath, not a body or form. The highest form is the Mayavi Rupa, which contains the whole man minus physical body and life. The form is that of the physical body, unless modified by will. The Higher Self  is the perfect o, Manas or Mayavi Rupa plus Buddhi and Atma, which together form a mirror in which is reflected Parabrahm which is the One Self.

The Higher Self is a spark of the Universal Spirit - Atma-Buddhi - universal, eternal, senseless on this plane. The Higher Ego is Manas. When it rises to Atma-Buddhi it completes the trinity which is the One. Manas is the self-consciousness. It is limited to one Mahamanvantara. Buddhi passes from Mahamanvantara to Mahamanvantara

The Mayavi Rupa is the middle self, and is the body used by adepts with the Kama Rupa as its vehicle. It is the human soul, the seat of the emotions and feelings as well as thoughts. When in the body it is the Manas. The 7 principles are aspects of one and the same entity, the form and character which are assumed depending upon the will.

In 19th century man instinct (Kama) has been to a great extent crushed by the development of Manas or Intelligence.  The Manas is the fallen Angel, the inbreathed essence of the Manasa Putras, or those beings who collectively form the Mahat or manifested Logos. The Monad, Atma-Buddhi, does not really belong to this plane at all, but is, so to say, Parabrahmic. Therefore on this plane, Manas is the highest principle in man, and it is this Manas which makes of man either a God or Devil, according as the Divine Monad acts on this plane through the Manas, or as the Manas produces effects on this plane, by acting upon the God-Life power of the lower part of the Buddhi.

Masters are those who are born with a Nirmanakaya in them.

Every one of you create for yourself a Master. Give him birth and objective being before you in the Astral Light. If he is a real Master he will send his Voice. If he is not a real Master, then the Voice will be that of the Higher Self.

Everyone will receive according to his own inner merits and development. 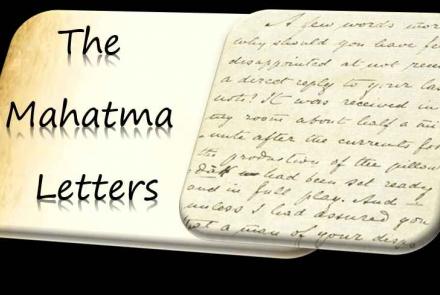