I am directed by H. P. Blavatsky to read to you, as well as I can remember it, what she wished me to say to the Convention for her, as she has been too sick to write you her customary salutatory letter.

The new cycle which has opened for Theosophy is already beginning to bear fruit. The progress made by the movement during the last year is more marked than ever before, but, while encouraging us, it is also a reminder that the time of harvest is rapidly drawing nigh, soon to be followed by the winter with storms and tempests. Thus, though congratulating all of you, my earnest and active co-workers for our noble cause, and especially my dear colleague, Mr. W. Q. Judge, I must urge you to increase rather than relax your efforts.

Looking back over the past year, see how much has been accomplished by the power of union and unselfish devotion to work. During 1888-89 only six new Branches were formed in America; while in the past year fifteen additional Branches have been organized, while the numbers of the Society have increased even more rapidly in proportion. But even more important is the marked change of spirit among the members with regard to the Society and its work, of which signs are not wanting. The past twelve months have witnessed more activity in true Theosophical work, the endeavor to help others, than any preceding year in the history of the Society in the West. There are signs, visible though only gradually coming into sight, that its members are at last awakening from their apathy and setting to work in earnest to practice the first principle of true Theosophy — UNIVERSAL BROTHERHOOD. Gradually they are becoming alive to the duty of helping others, as they have been helped, by bringing a knowledge of the life-giving truths of Theosophy within the reach of all. The Tract Mailing Scheme is receiving increased support, more workers are volunteering assistance, and funds are forthcoming for carrying on the work with increased efficiency and ardor. The Pacific Coast Branches have set the example of undertaking this task as Branch work in a systematic and organized manner, and the elevation, the earnestness of the workers there deserve much praise. All gratitude is also due to the many faithful and earnest members in America who responded so nobly and generously to my appeal for aid to continue the publication of Lucifer. My heartiest thanks are theirs personally, one and all, and the fruit of their efforts will be seen in the future career of the magazine.

In England the past year has witnessed a rapid growth and a great extension of the Society and its work. Our cause has gained two noble and devoted adherents, whose names have been prominent for long years past in connection with every effort to bring real aid to suffering humanity — Annie Besant and Herbert Burrows. In them our movement in the West has gained able exponents both with pen and voice. They fill to some extent the long and sorely-felt need of speakers who could place Theosophy in its true light before large audiences, and I, especially, am deeply indebted to Annie Besant for her invaluable assistance and cooperation in the conduct of Lucifer.

New Branches have been formed here in the past twelve months, large numbers of members have joined our ranks, while the growth of general interest in Theosophy is evidenced by the changed tone of the Press and the frequent letters and articles on the subject of Theosophy. So great is the increase of interest in London that we find ourselves obliged to build a large meeting hall, at the new Headquarters to which we shall remove in August for the weekly meetings of the Blavatsky Lodge, as our old home is quite too small to accommodate the number of enquirers who attend the meetings.

Colonel Olcott’s prolonged stay in England has been of great assistance to our work. His lectures throughout England and Ireland have been the cause of the formation of several new Branches, and his example and influence have done much good on all sides. To myself his presence has been a great pleasure and satisfaction, and the added strength when the “Two Founders” were once more side by side has made itself felt in every department of our work. It was with great regret that I saw him leave for India without paying his promised visit to America; but the Society in the East has most need of his presence, and the death of Mr. Powell rendered his direct return imperative. Though not personally acquainted with Mr. Powell, I cannot forbear paying a heartfelt tribute of gratitude to his memory for the splendid work he did for the Society, and for the nobility of his complete self-sacrifice to the service of Humanity. Colonel Olcott was accompanied on his return to India by two of our staff of workers here, Mr. Bowles Daly and Mr. E. D. Fawcett, whose presence at Adyar will, I trust, be of great value to my beloved colleague, our President-Founder.

A large pan of these results is due to the added strength, and, above all, the increased spirit of solidarity, which the organization of the Esoteric Section has infused into the T. S. To the members of that Section I say: See and realize what great results can be achieved by those who are really in earnest and unite unselfishly to work for humanity. Let this year’s outcome show you in unmistakable signs the weighty responsibility that rests upon you, not only towards the Society, but towards the whole of Humanity. Therefore do not for one moment relax in your efforts; press closer, shoulder to shoulder, every day; stand together as one man, come what may, fine weather or storm, and the victory of the cause to which you have pledged yourselves is certain. Striving thus in unison with your Higher Self, your efforts must and will be fruitful of good to the Society, to yourselves, to Humanity. Coming years will show a steady, healthy growth, a strong, united organization, a durable, reliable, and efficient instrument ready to the Masters’ hands. Once united in real solidarity, in the true spirit of Universal Brotherhood, no power can overthrow you, no obstacle bar your progress, no barrier check the advance of Theosophy in the coming century.

But enough of the past. Let the encouragement we draw from survey of the results accomplished in the year that has fled serve to spur us on to greater efforts and more strenuous exertions. Let it make all feel that there is a power behind the Society which will give us the strength we need, which will enable us to move the world, if we will but UNITE and WORK as one mind, one heart. The Masters require only that each shall do his best, and, above all, that each shall strive in reality to feel himself one with his fellowworkers. It is not a dull agreement on intellectual questions, or an impossible unanimity as to all details of work, that is needed; but a true, hearty, earnest devotion to our cause which will lead each to help his brother to the utmost of his power to work for that cause, whether or not we agree as to the exact method of carrying on that work. The only man who is absolutely wrong in his method is the one who does nothing; each can and should cooperate with all and all with each in a large-hearted spirit of comradeship to forward the work of bringing Theosophy home to every man and woman in the country.

Let us look forward, not backward. What of the coming year? And first a word of warning. As the preparation for the new cycle proceeds, as the forerunners of the new sub-race make their appearance on the American continent, the latent psychic and occult powers in man are beginning to germinate and grow. Hence the rapid growth of such movements as Christian Science, Mind Cure, Metaphysical Healing, Spiritual Healing, and so forth. All these movements represent nothing but different phases of the exercise of these growing powers — as yet not understood and therefore but too often ignorantly misused. Understand once for all that there is nothing “spiritual” or “divine” in any of these manifestations. The cures effected by them are due simply to the unconscious exercise of occult power on the lower planes of nature — usually of prana or life-currents. The conflicting theories of all these schools are based on misunderstood and misapplied metaphysics, often on grotesquely absurd logical fallacies. But the one feature common to most of them, a feature which presents the most danger in the near future, is this. In nearly every case, the tenor of the teachings of these schools is such as to lead people to regard the healing process as being applied to the mind of the patient. Here lies the danger, for any such process — however cunningly disguised in words and hidden by false noses — is simply to psychologize the patient. In other words, whenever the healer interferes — consciously or unconsciously — with the free mental action of the person he treats, it is — Black Magic. Already these so-called sciences of “Healing” are being used to gain a livelihood. Soon some sharp person will find out that by the same process the minds of others can be influenced in many directions, and the selfish motive of personal gain and money-getting having been once allowed to creep in, the one-time “healer” may be insensibly led on to use his power to acquire wealth or some other object of his desire.

This is one of the dangers of the new cycle, aggravated enormously by the pressure of competition and the struggle for existence. Happily new tendencies are also springing up, working to change the basis of men’s daily lives from selfishness to altruism. The Nationalist Movement is an application of Theosophy. But remember, all of you, that if Nationalism is an application of Theosophy, it is the latter which must ever stand first in your sight. Theosophy is indeed the life, the indwelling spirit which makes every true reform a vital reality, for Theosophy is Universal Brotherhood, the very foundation as well as the keystone of all movements toward the amelioration of our condition.

What I said last year remains true today, that is, that the Ethics of Theosophy are more important than any divulgement of psychic laws and facts. The latter relate wholly to the material and evanescent part of the septenary man, but the Ethics sink into and take hold of the real man — the reincarnating Ego. We are outwardly creatures of but a day; within we are eternal. Learn, then, well the doctrines of Karma and Reincarnation, and teach, practice, promulgate that system of life and thought which alone can save the coming races. Do not work merely for the Theosophical Society, but through it for Humanity.

May Theosophy grow more and more a living power in the lives of each one of our members, and may the coming year be yet more full of good work and healthy progress than the one just closing, is the wish of your humble co-worker and fellow member. 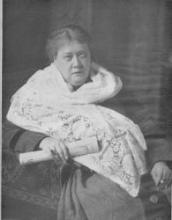