This collection of the SIX VOLUMES (over 2000 pages) provides intimate details of the extraordinary account of the foundation of the Theosophic Society. This amazing insight into the lives of the two founders, the author Henry Olcott, and Madame Helena Blavatsky, let us understand many of the episodes that followed the foundation of the society, the publication of Isis Unveiled, the Secession of the American Chapter lead by William Q. Judge, and so many other historical facts that would have been otherwise lost to history.

This volume (1895) describes the first meeting between Olcott and Madame Blavatsky and the founding of the Theosophical Society in 1875. Olcott continued to practise as a lawyer (and supported the Society financially) while in the evenings he and Madame Blavatsky would entertain visitors or collaborate on the book Isis Unveiled. The author portrays his friend as a spiritual medium and describes how Madame Blavatsky's body was from time to time overshadowed by other 'entities'.

THE Diary from which the present series of chapters has been compiled was opened in January, 1878, three years after the formation of the Theosophical Society at New York, by the late Madame Blavatsky, myself, and a few others, and has been systematically kept up ever since. Under the title, "Old Diary Leaves: The True History of the Theosophical Society," a volume, with illustrations, was published in the year 1895, by Messrs. G. P. Putnam & Sons (London and New York), which has had a wide circulation. It covered the period from the first meeting of my great colleague and myself in the year 1874, down to the sailing of our party from New York for Bombay in December, 1878. The thread of our narrative, now taken up, leads us from that point onward to the autumn of 1883, embracing the novel and exciting incidents of the establishment of our movement in India and Ceylon, from which such momentous results have followed. No important event has been omitted, no falsification of the record resorted to. Other volumes will be issued from time to time should there be a demand. I am proud of the fact that, although these memoirs have been appearing monthly in the Theosophist since March, 1892, and have been read by hundreds of living witnesses to the events cited, my veracity has not once been challenged, and but one slight inaccuracy pointed out. The growth of the Society has been as steady within the past four years as it had been up to the time of the publication of the first volume of these memoirs, the number of new branch charters issued having been 148, and the total, from the beginning up to the close of last year (1898), 592, as against 394 up to the close of the year 1894. These Branches are now grouped within eight administrative sections, whose head-offices are respectively at Benares, London, Paris, Amsterdam, Stockholm, New York, Sydney, and Auckland (N.Z.). The General Headquarters of the whole Society and the President Founder's official residence are at Adyar, Madras. The work, therefore, already covers the greater part of the civilized world while its literature finds its, way over an even wider area, being read in the camps of miners and explorers, the huts of pioneers, and the cabins of ships sailing in all seas.

THE first volume of these historical sketches covered the period from the meeting of Madame Blavatsky and myself, in 1874, to our departure from New York for Bombay in December, 1878; the second tells of our adventures in India and Ceylon, the formation of Branches, the giving of lectures, healings of the sick by hundreds, occult phenomena produced by H.P.B. etc., and brings us down to the autumn of 1883: at this time we take up the thread of narrative, and go forward to the month of May, 1887. I think the reader will agree with me that the subject-matter of this volume possesses absorbing interest, quite equal to that in its two preceding volumes, if not even greater. Accounts are given among other things of my meetings with several of the "Masters" in the course of my travels, and of the results of the same, of our removal of the Society's Headquarters from Bombay to Madras, of H.P.B.'s last departure from her beloved Indian home into the exile of an European residence. The troublous times of the Coulomb conspiracy are dealt with in this volume, and the true story of the S.P.R. Report is placed on record, so that each member of our world-wide organisation may be vi OLD DIARY LEAVES in a position to refute the slanders which, even at this date, echo in some quarters round the name of Mme. Blavatsky. The building and formal installation of the Adyar Library, with ceremonies of an unprecedented character conducted by Indian pandits, Buddhist monks, Parsi mobeds, and a Muslim maulvi, are described, and numberless details of the growth of the Theosophical movement, and of our Society in particular, are given. The story takes us to Europe as well as through Eastern lands, the intelligent reader being afforded the chance of watching the gradual outworking of the plan of the unseen Founders, whom, their visible agents know to be at work through this channel in spreading throughout the world a knowledge of the principles which were taught by the Ancient Sages, and the general understanding and adoption of which would cure most of the evils which now afflict mankind. For men suffer because of ignorance of themselves and their environment, and the false ideals of happiness which they struggle for are begotten by their ignorance—by nothing else. The war of individual men, of classes, and of nations can never—will never—cease until the ideal of the Perfect Man, the omnipotence of His perfected Will, and the irresistible force of the law of Karma are grasped by the public mind, and the present popular ignorance is dispelled.

The volume before us deals with some five years during which the writer travelled all round the world, visiting Japan twice, Europe twice, Ceylon several times; Australia, America, Burma each once, besides, making long lecturing tours in India. These were years which saw the advent of Mrs. Besant to the Theosophical Society, and witnessed the death of Madame Blavatsky, and of her learned Hindu colleague, T. Subba Row. Work on behalf of Buddhist Unity occupied much of the writer's time and energy in his Eastern travels, while, in the West, he devoted a good deal of attention to the study of hypnotism, both in Paris and Nancy.

THE year 1893 now opens up before us, and its events will be found to be very important. As previously shown, the rumblings of the coming tempest about Mr. Judge were beginning to be heard. Towards the end of last year the arrival of Mr. Walter G. Old of the London staff, with the budget of notes and memoranda which he had taken, enabled me by comparing documents to see the depth and fullness of the treachery which Mr. Judge had long been planning. I find from my Diary of 1893 that the greater part of the first day was spent by Messrs. Keightley, Old, and myself in summarising the evidence in the case; and needless to say, all our hearts were filled with sorrow, for this was almost if not the very first case of downright perfidy in our Society’s history. Until now the splendid collection of Japanese Buddhist Scriptures, which I had brought back from Japan in 1889, had been lying on our shelves uncatalogued for lack of expert help; but now Mr. Kawakami, a young priest student of Kyoto, who had. come to India to pursue his studies in Sanskrit, stopped with us for some time and very kindly set to work to prepare a list of the books.

ALL good things must come to an end and the grand Rajput wedding at Varal was no exception. On the 19th of April Prince Liluba, the Heir Apparent of Morvi, left and the bride’s presents and dowry were displayed in a large temporary structure. The presents alone were worth thirty thousand rupees and made a splendid display, as may be imagined from what I said in the preceding chapter. The wedding guests and hangers-on having departed, Harisinhji and I were left alone. He had a somewhat extensive library and I took advantage of the occasion to read, among other things, Max Nordau’s Degeneracy, which gave me the impression that the author was fully persuaded in his own mind that he was the only person in the world who could not be classified as a degenerate. Still, his book is full of sage deductions from observed facts and should be read along with the books of the great hypnotists of Salpêtrière and Nancy by all who have to do with persons of hysteric temperament. I left Varal for Surat via Sihor on the 24th, in what discomfort will be imagined when I say that the thermometer was registering 108 to 110 degrees (F.) in the shade. The top of one’s head became burning hot from the heat rays reflected from the roof of the railway carriage. 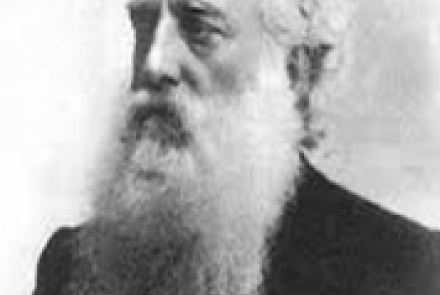