It would be a difficult task to give full, detailed accounts of all the circumstances which occurred during the preparation of this remarkable work, because it must never be forgotten that H.P.B. was, as she often herself expressed it, only the compiler of the work. Behind her stood the real teachers, the guardians of the Secret Wisdom of the Ages, who taught her all the occult lore that she transmitted in writing. Her merit consisted partly in being able to assimilate the transcendental knowledge which was given out, in being a worthy messenger of her Masters, partly in her marvellous capability of rendering abstruse Eastern metaphysical thought in a form intelligible to Western minds, verifying and comparing Eastern Wisdom with Western Science.

Much credit, also, is due to her for her great moral courage in representing to the world thoughts and theories wholly at variance with the materialistic Science of the present day. It will be understood with difficulty by many, that the much abused “phenomena” played an important part in the compilation of “The Secret Doctrine;” that H.P.B. very often received so-called precipitated messages, containing matter which later on became part of the book. 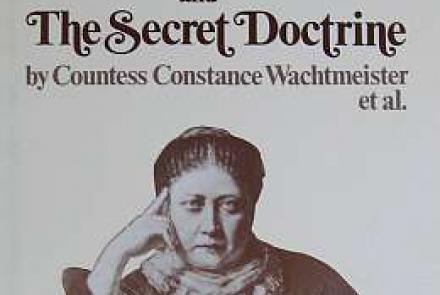